To be a successful Funeral Director/Embalmer you should… 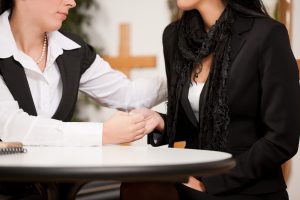 Expect to spend 20 percent of your time with the deceased, and 80 percent with the living. Funeral Director/Embalmers perform a variety of tasks, including the arranging of the funeral, preparation of the deceased, meeting with the public during calling hours, and being active in the community for both public service and public relations. There is a substantial amount of paperwork involved for record keeping and federal and state regulations.

Where could I work?

Typically, a funeral director/embalmer works at a funeral home. Small homes, doing 70-120 funerals per year, will have varying work hours dependent on the availability of a funeral. Generally, funeral directors will work a 40-hour week including evenings, weekends, and on-call hours.

What is the average annual salary?

What is the future of this career?

The BLS reports overall employment of funeral service workers is projected to grow 4 percent from 2020 to 2030, slower than the average for all occupations.

Despite limited employment growth, about 4,000 openings for funeral service workers are projected each year, on average, over the decade. Most of those openings are expected to result from the need to replace workers who transfer to different occupations or exit the labor force, such as to retire.

What type of education and/or training do I need?

Where can I get the education and/or training?

Do I need a license or certification for this career?

Licensure is required in the state of Connecticut. Prerequisite: Connecticut requires completion of an approved Funeral Director program; National Board Examination of the Conference of Funeral Service Examining Boards; one year of acceptable practical training; Connecticut laws and regulations examination.

Where can I get more information?